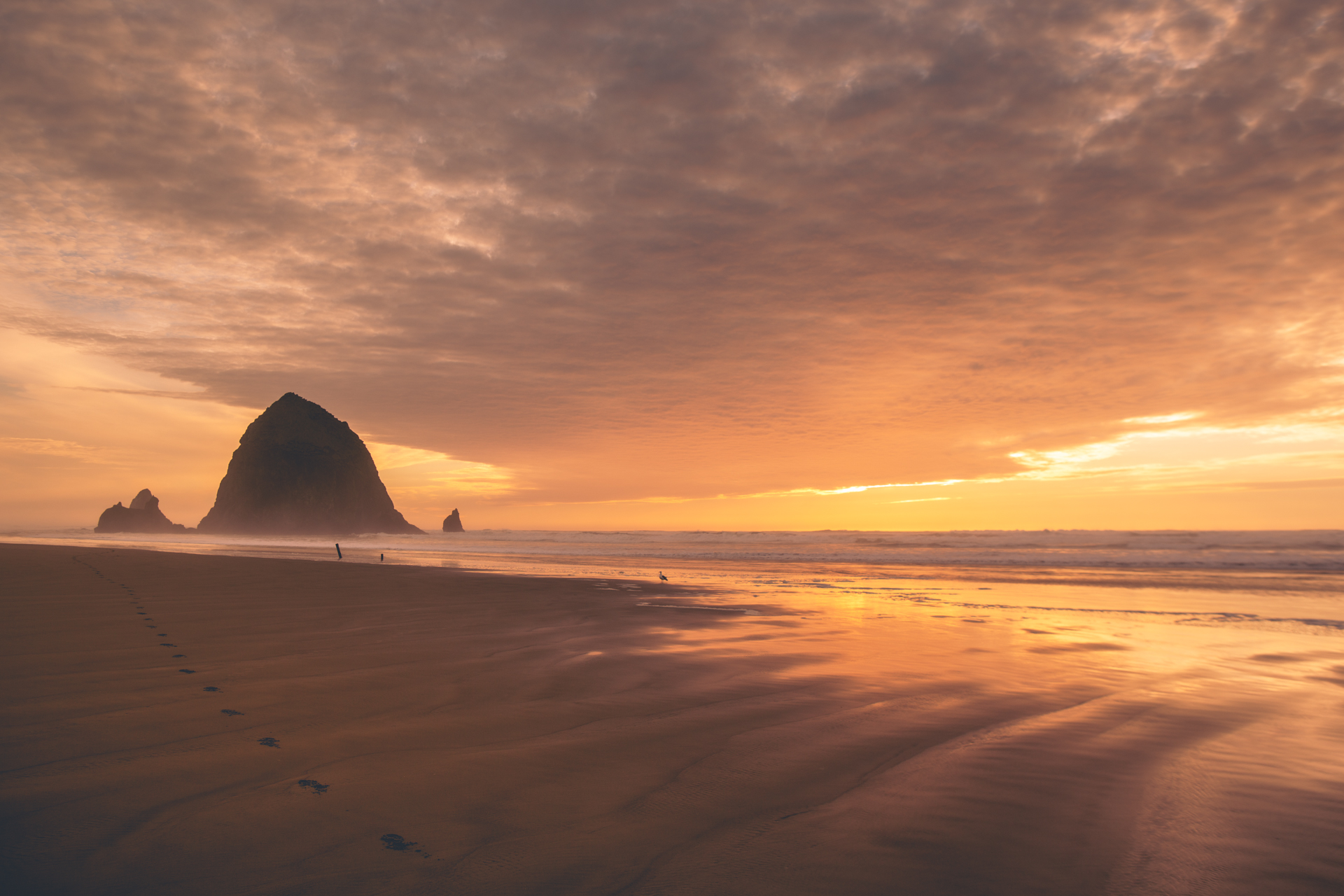 Packing Up & Heading Back East with a Beagle Named Frank

In November of 2016, my wife and I had finally packed all of our belongings into the back of a moving truck and closed the chapter on the Pacific Northwest. For the previous three years, Jess and I had made a home in West Seattle, WA where I worked for Line Skis and Full Tilt Boots.

For just the two of us, living in Washington has been an amazing adventure exploring Seattle and everywhere nearby. But after having our first child, we found that 2,800 miles and cross country flight was a bit too far to be away from extended family. So we decided it was time to return to the East Coast.

Day One — Seattle to Forks

I suppose it was stereotypical Fall weather in the Northwest when Frank and I finally left West Seattle. It was indecisively wet, half heartedly downpouring but mostly a steady drizzle. After dropping some last remaining items off at the K2 office downtown, we boarded a ferry headed to Bainbridge Island, gliding across Elliot Bay with the Emerald city behind us.

Out destination for the day was to cross onto the peninsula of Eastern Washington. From Port Gamble, we drove across the Hood Canal bridge and skirted the Salish Sea along the 101 until Port Angeles, climbing up the road to Hurricane Ridge and the the Olympic National Park.

There are few places so deservedly its name than Hurricane Ridge. Cresting around a bend at one point, I’m sure the Tacoma would’ve left the road had it been a pound lighter with the gusts. Arriving at the Hurricane Ridge, I barely could open my door against the wind. The lack of photos from this location is a result of both wind and gloom.

Heading further west on the 101, Frank and I crossed the Elwha and made a pit stop at Lake Crescent. The rain held out for a few photos.

From Lake Crescent, we continued on to Forks and spent a night in a dog friendly motel.

The sky was still dark when Frank and I woke and stirred ourselves into the second day’s journey. Driving as the day began, it was nice to see the previous day’s weather had moved out, leaving behind a sky of of dappled pink and blue hued clouds. On the checklist today: Pacific Ocean, Hoh Rainforest and Cannon Beach, Oregon.

The Hoh Rainforest was the first on the spots to visit but — it was a washout. Still, the drive into the eastern boundary of the Olympic National Park and the Hoh National Forest didn’t disappoint. The tall trees that lined the forest service road were a living vignette and draped in moss.

The Pacific Ocean was a little more miles west of where Frank and I started our day and the next stop after striking out at the Hoh Forest. Looking back, I guess it’s a bit weird that Jess and I spent years living on the West Coast but neither of us had driven out to the Pacific. I was able to check that box off by finding the water at Ruby Beach in the northern reach of the Quinault Reservation. The sand was littered with flotsam of trees and empty of any other visitors but me.

I snapped a tourist picture of the World’s Tallest Spruce Tree, a Sikta Spruce to be exact, in Lake Quinault. It was one of the six champion trees in the Quinault Valley, topping out a 191 feet and estimated to be 1,000 years old, give or take a decade or two.

I’ll abstain from posting my attempt of a vertical panoramic trying to capture all 191′ of the spruce. It certainly wouldn’t do it justice. You’ll just have to go and see the tree for yourself.

The 101, Frank and I all continued south from Lake Quinault through Aberdeen (Kurt Cobain’s home town) and crossing into Oregon. We drove through the hometown of the Goonies — Astoria and finally arrived north of Cannon Beach in the late afternoon, taking in the view of the famous sea stack from Ecola State Park.

After a hour or so viewing Haystack Rock from a distance, Frank and I headed down for a closer look at the 235′ rock that rises from the sand. With the sun setting, I left Frank curled up on the passenger seat in truck and walked out on the beach to take in the setting sun and scene. For as busy as the beach was, with hundreds of families taking in the same sunset, it wasn’t impossible to find an unobstructed view of the stack without people. When the sun had finally slipped below the horizon, I turned my attention back to the truck and Frank and went looking for a RV park or campground to spend the night.

More of the same lay ahead for Day 3 of the trip which was to continue to head south. Tillamook, Neskowin, Lincoln City, Frank and I continued through the small hamlets that dotted the Pacific Coast of Oregon. When we stopped in Depoe Bay earlier in the morning, we read a scenic marker that described how Gray Whales, breaching the surface of the ocean, could come within yards of the shore due to the dramatic drop off of seafloor. Frank and I watched the boiling water of sea foam and waves, looking for whales but saw none. A couple, who appeared to be Amish, looked as well.

In Agate Beach, I stopped to photograph more sea stacks near Yaquina Head Lighthouse. In Yachats, we meandered up a winding switchbacks in the Tacoma to Cape Perpetua Overlook and watched the aptly named Devils Churn crash and crest. We attempted to spy Thor’s Well but were skunked as the tide was too high but still enjoyed watching the ways roil under the arched bridge of the Oregon Coast Highway.

We took in the views from an elevated position off of the 101 of Heceta Head Light. Apparently it was a great spot to spy on sea lions, but like the whales of Depoe Bay, we saw none.

Stop after stop, Frank and I collected photos of the Oregon Coast with its dunes of sand and wavering seagrass. We paused in Bandon, Port Orford and north of Ophir at Sisters Rock. We kept watch for scenic overlooks and byways and stopovers but didn’t monitor our fuel. When we finally passed into and then through the Northern California town of Crescent City, the fuel light blinked on. We should’ve stopped but had figured we’d have ample time to find a gas station just up the road. We didn’t find one.

By then, we had already crossed the point of no return into the Del Norte Coast Redwood State Park and the Tacoma chugged fuel climbing up the byway amongst the towering trees, illuminated by the headlights and resembling the ankles of giants. The incline never seemed to end and I waited for the truck to finally give a last gasp, exhausted of fuel, while I mentally resigned myself to the impending fate of spending the night on the side of the road as Sasquatch food.

And when all seemed lost to the darkness of the night and an empty fuel tank, the road finally started to descend. My enthusiastic sigh almost woke the beagle on the seat next to me who had been oblivious to our near demise the entire episode. I shifted to neutral and let the truck coast for miles until we finally entered Klamath and rolled into the nearest gas station, located conveniently next to a RV park.

That was enough adventure to cap the day.

“Don’t worry about the bears, they won’t like your dog” is how the woman behind the desk of the Mystic Forest RV Park’s office greeted Frank and I. I’d keep that in mind as I walked to the shower in the predawn hours. The day’s map called for stops along the way south to find some of the mythic redwoods Frank and I had skirted underneath the night before while we were racing the fuel gauge. I had done some research and discovered the Spielberg had filmed some of his film, Jurassic Park: The Lost World, in the area; at a location called Fern Creek. This would certainly be a spot we’d cross off.

Frank and I packed up from the RV Park and headed south again, trailing the 101 to towards the Coastal Trail and Fern Canyon Loop. The drive in was a pockmarked Forest Service Road that jostled the Tacoma; Frank swaying in the passenger seat with every bump and feverishly sticking his beagle nose out the crack of the window, taking in the smell of big trees and moss. The road weaved through towering trees before tucking itself underneath a bluff which I assume gave the area it’s name — Gold Bluff. After a few miles, we found a parking spot and I continued on foot, leaving Frank curled in the passenger seat, with my camera and tripod. The hike was quick to the walled fern valley and was definitely worth it but with many more miles ahead, I limited my time in the area and quickly headed back.

The hope, albeit a bit foolhardy, was to make the Yosemite by nightfall. Frank and I hopped on the 5 and continued South.